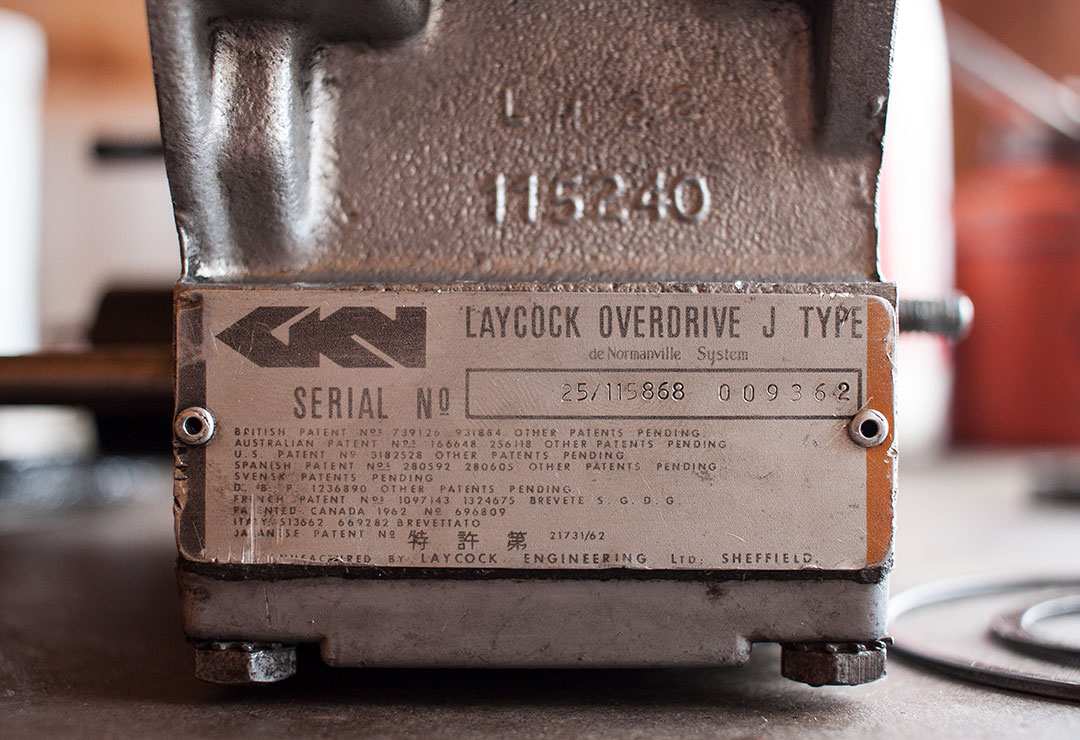 Once the gearbox was complete the overdrive was next up. It’s a Laycock J type used on many cars of the era. Mine always worked quite well so I wasn’t expecting to find anything particularly out of order. It basically consists of an epicyclic gear system which allows the input shaft to reduce speed by about 25% in 3rd and 4th gears. Much better for cruising. 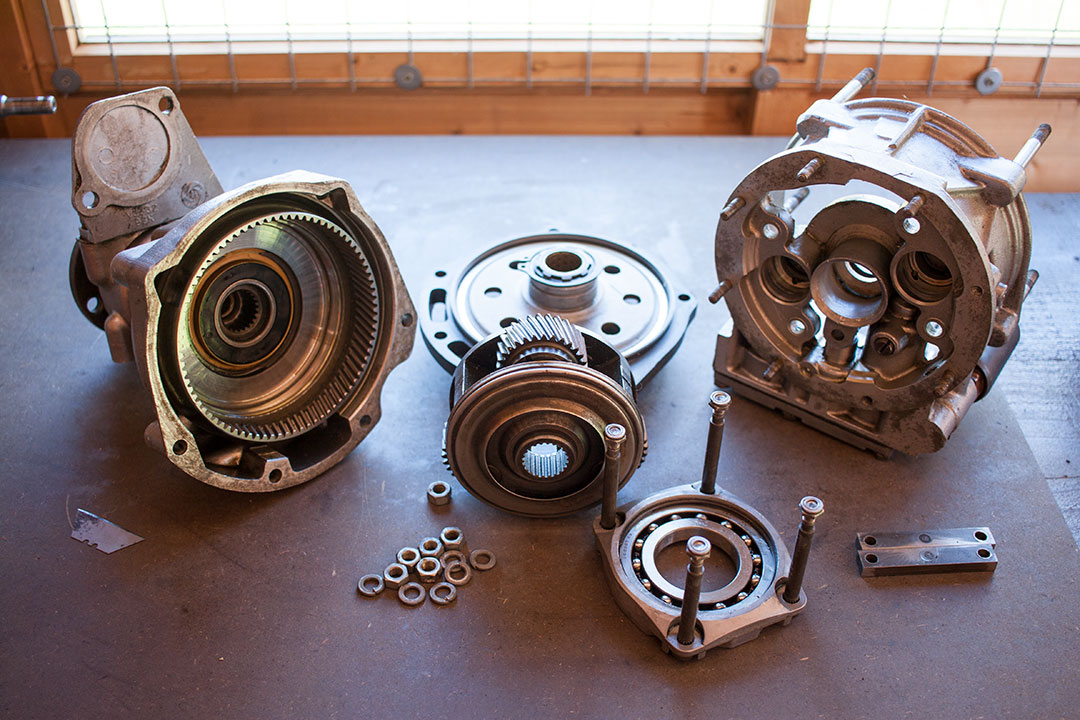 While I had it in bits my plan was to at least replace all the bearings and clean out the various oil filters. I replaced the O-rings on the two pistons also. There appeared to be plenty of material left on the cone clutch. The annulus and brake ring looked okay. I replaced the sun wheel simply because it was cheap for new-old stock part at £7 and that meant a new bush also. It’s just held in with a snap ring so easy to replace too. I removed the speedo drive, cleaned that up and replaced the sealing O-ring also. 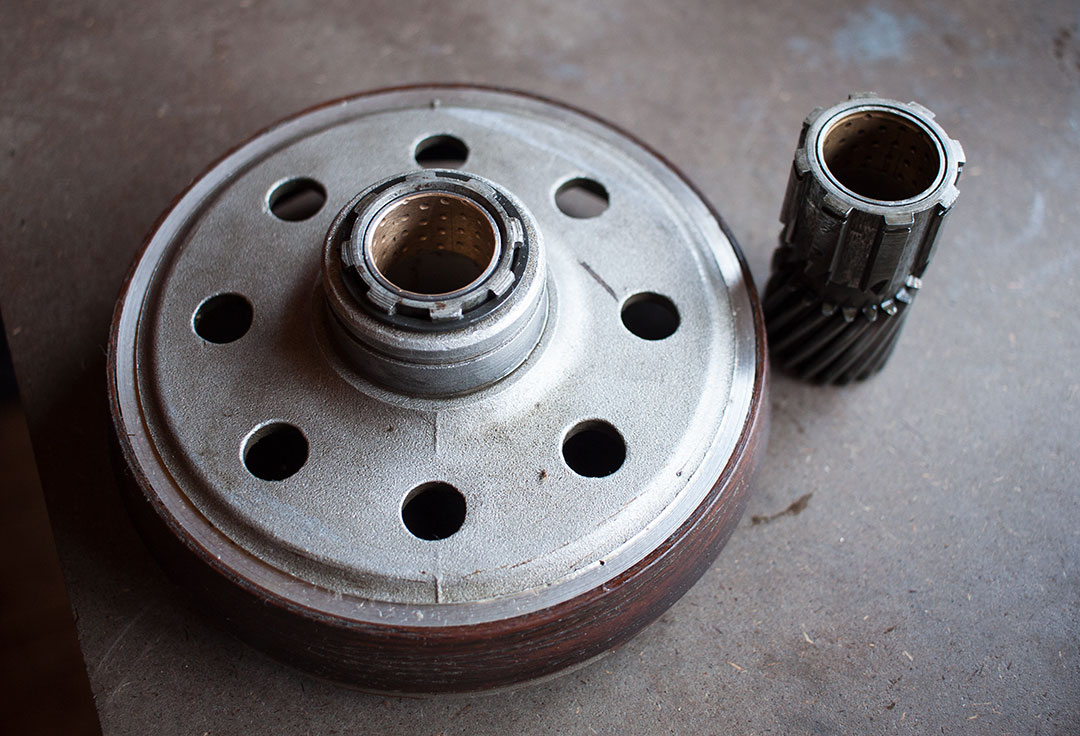 Next up was to remove the annulus from the rear case. I used a piece of steel I had lying around from when I did the camshaft on the Golf and used that to prevent the flange rotating while I unbolted it. I supported the casing between the bench and a piece of wood and carefully knocked the annulus through with a small soft mallet. 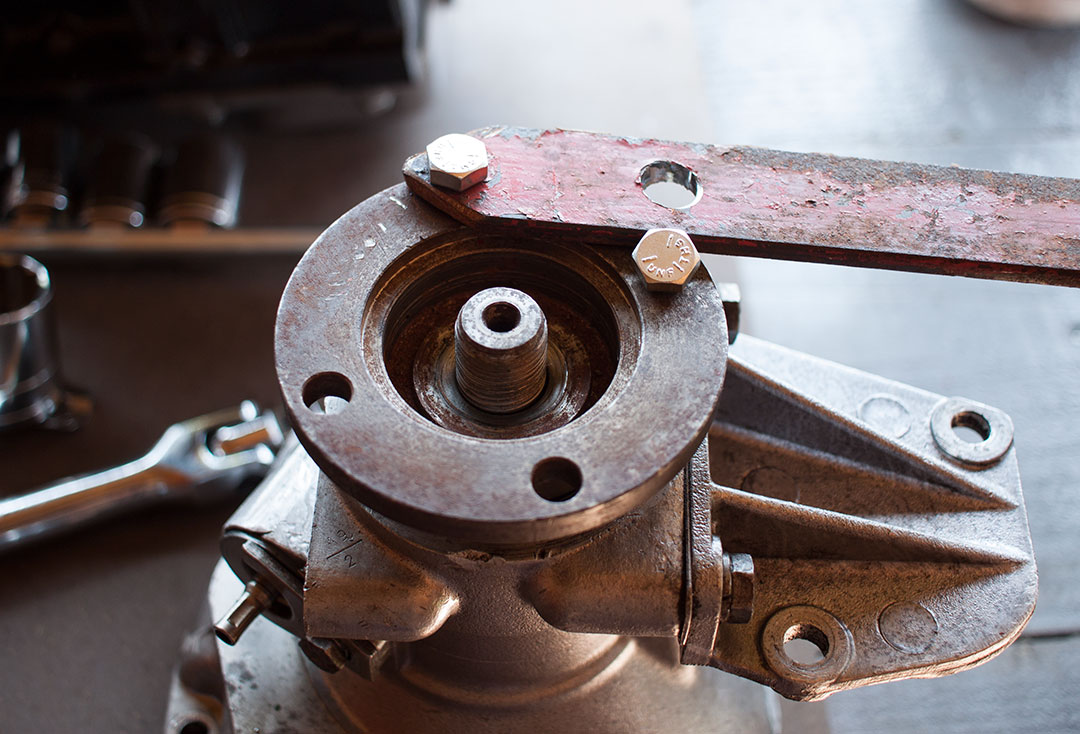 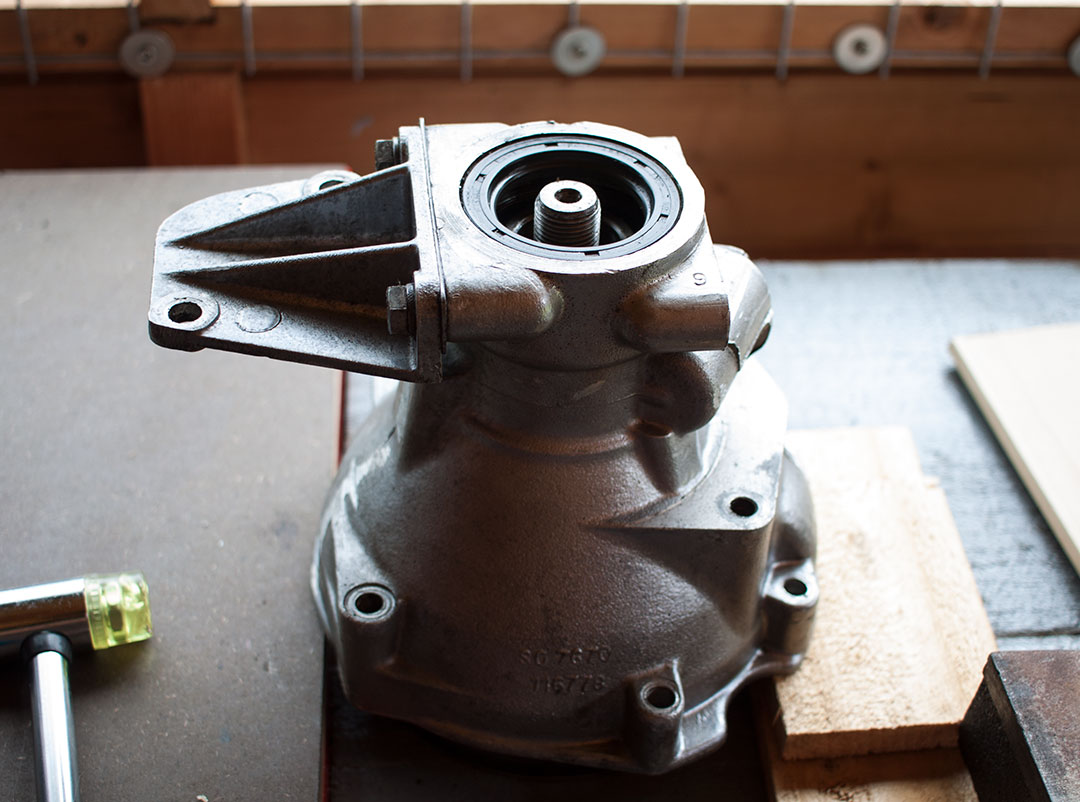 I had new bearings for the rear casing. I didn’t find them too difficult to source online just from part numbers. The outer one can be knocked through with a brass drift. The inner one came out on the shaft of the annulus when I did mine. Another job for the invaluable bearing puller. The speedo drive gear and spacer should just slip off. The oil seal just pops out. 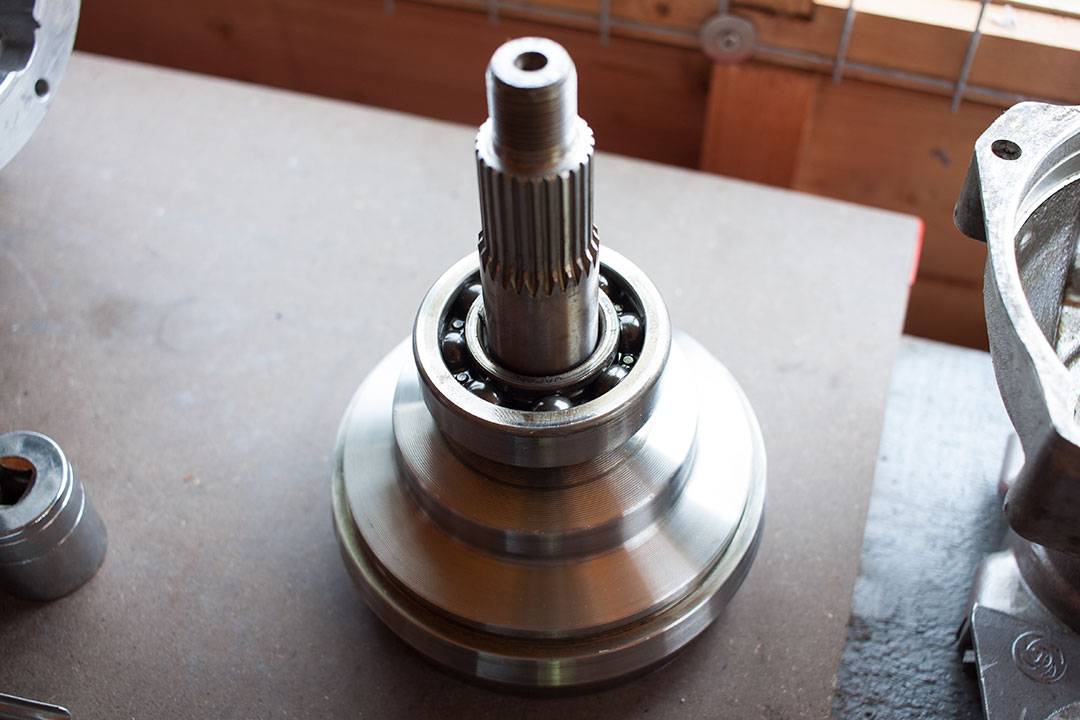 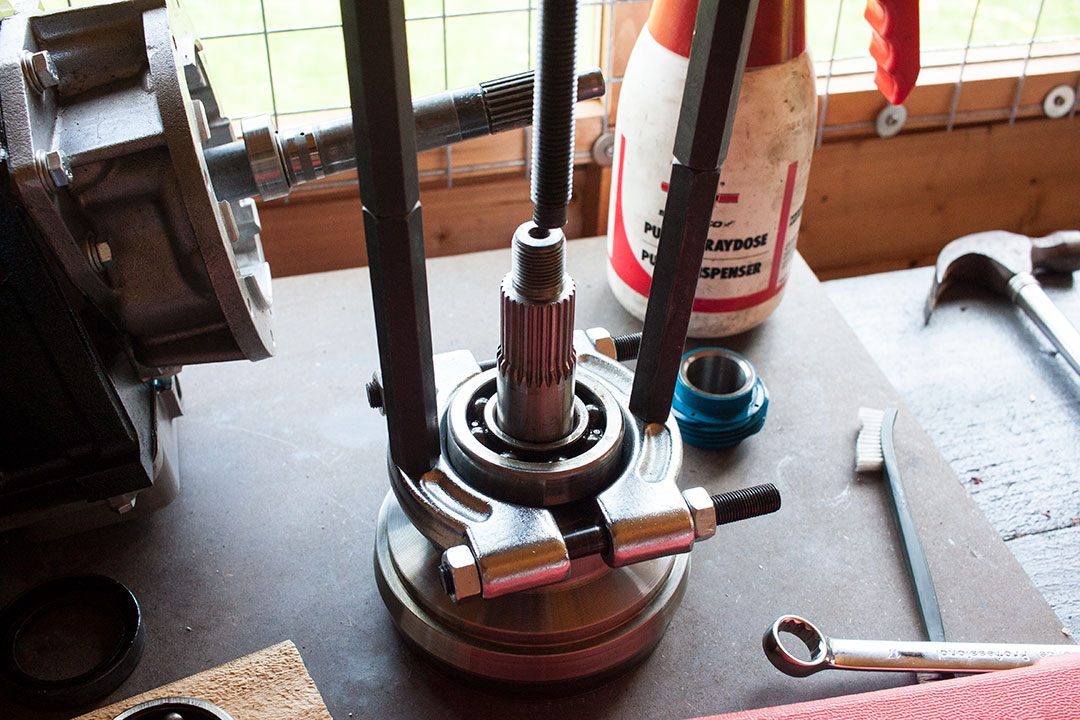 Within the center of the annulus is a sprag clutch. This one-way clutch is used to take up some of the driving load to the output shaft when the overdrive is engaged. If the one-way clutch wasn’t there, the cone clutch would have to take on all the driving load of the input shaft and would slip—or it would have to be much larger to accommodate it. It also prevents operation in reverse if the overdrive were to be engaged as it would break some components (which is not possible anyway due to the isolating switch that limits its use to 3rd and 4th gears only).

I removed the sprag clutch by removing the circlip and brass oil thrower first—cleaned up inside and replaced all twelve rollers. 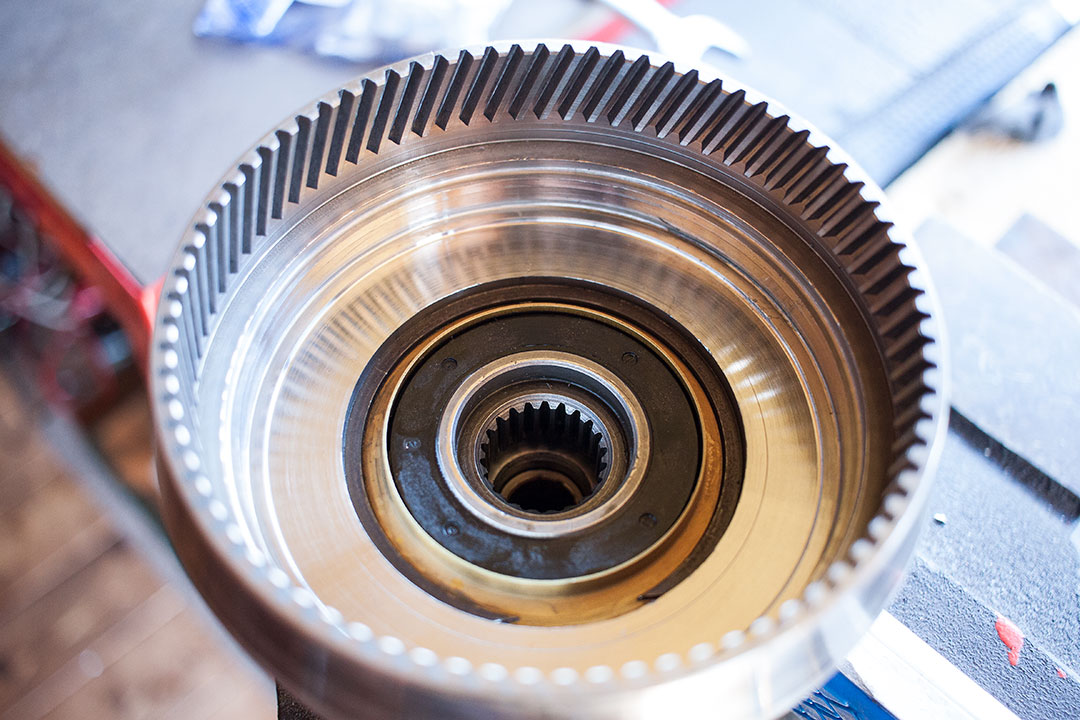 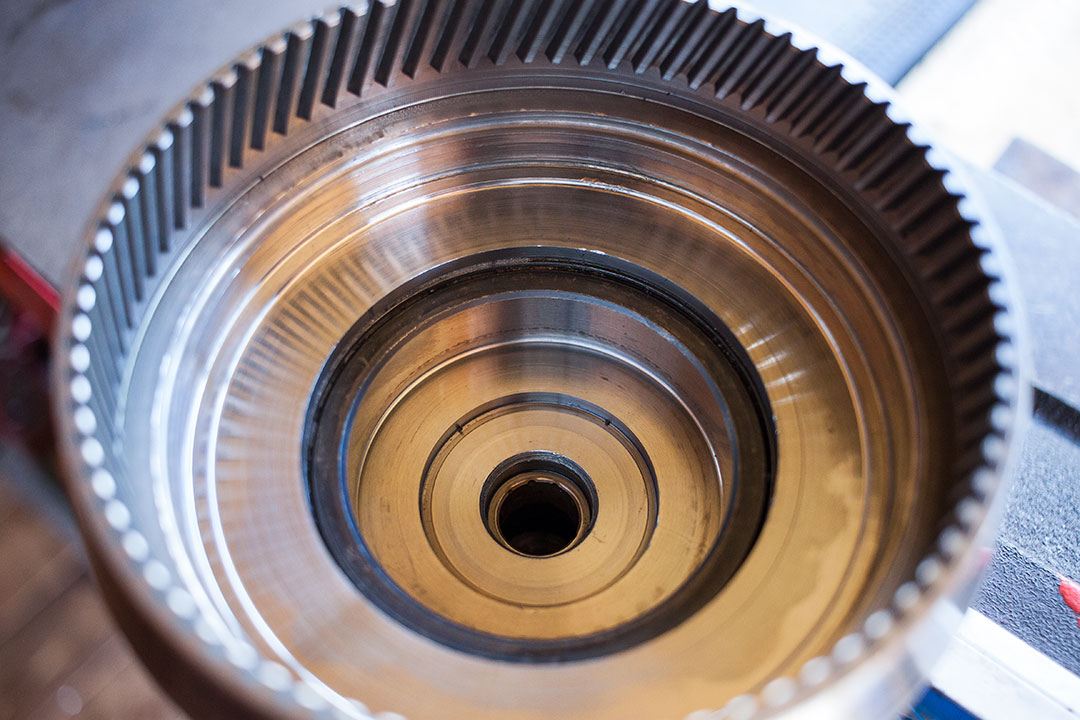 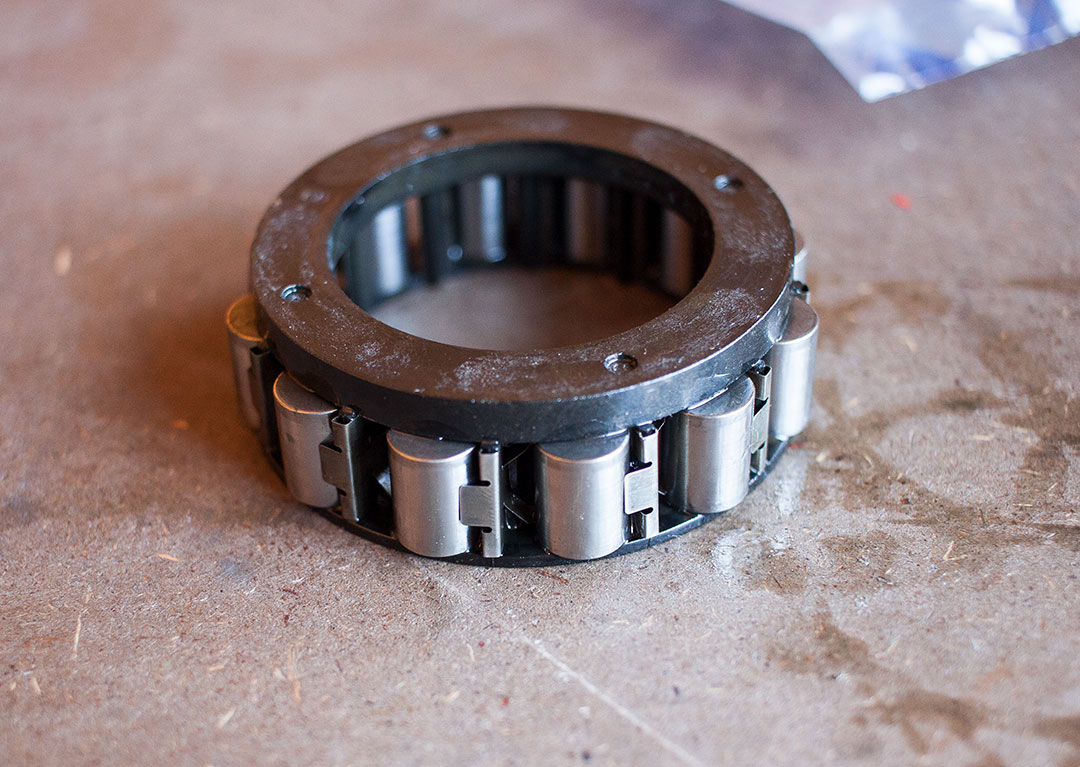 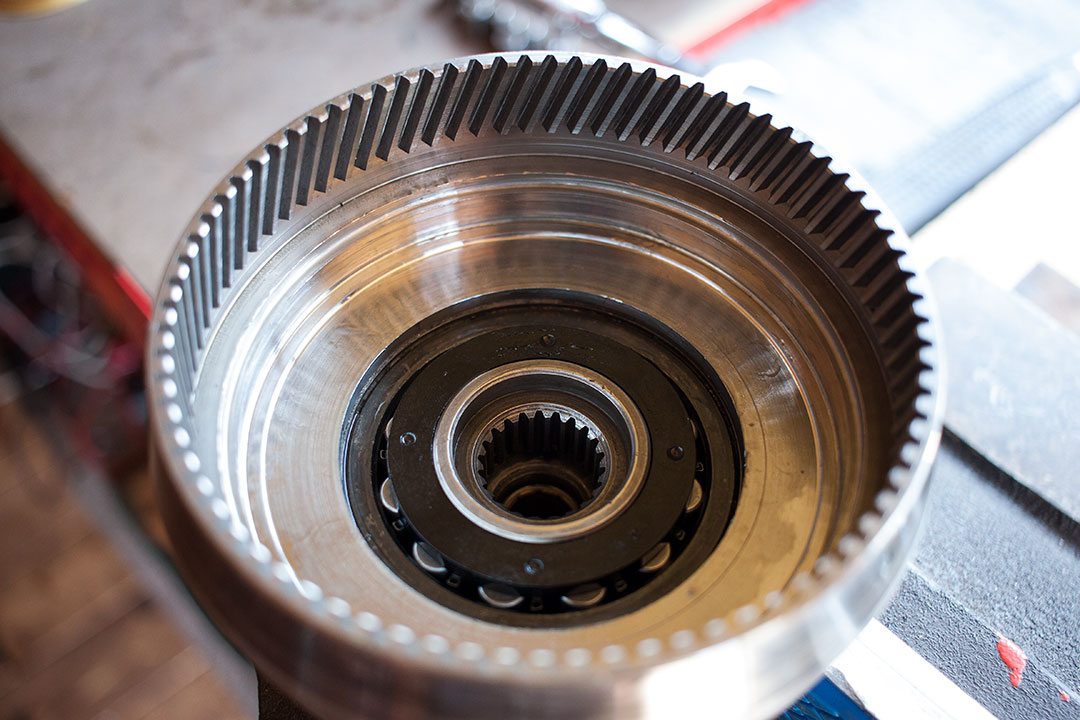 Now that was sorted the annulus could go back in with the new bearings, speedo drive gear and spacer. The speedo drive gear goes back in the the plain boss facing the inner bearing (towards the gearbox). I fitted a new oil seal to the rear casing and cleaned up the flange where it seats. The torque spec for the flange nut is between 80 and 130 lbf.ft (108 to 176Nm) which seems like a pretty broad spec to me! I set my toque wrench to 100 lbf.ft and tightened the nut. There’s a definite stop when the nut has come to the end of the threads so I don’t think it’s particularly essential to get this exactly right. It’s not like the pinion shaft on the diff where you have two tapered roller bearings and must get it just right. 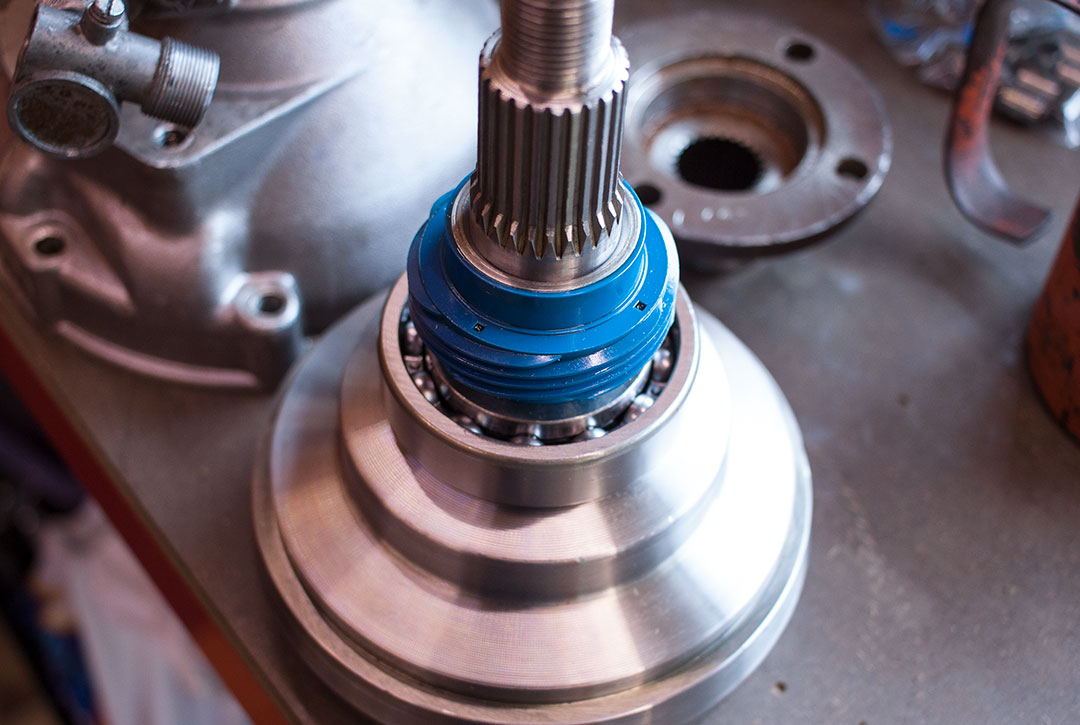 The cone clutch and bearing carrier fitted with a new bearing could go back together and then fitted back to the main casing along with the two hydraulic pistons. The two bridge pieces could be fitted and the bearing carrier bolted in. You can just about push the carrier through against the springs to get the locking nuts started on the thread. The brake ring had a new coat of paint on the external surface fitted before the cone clutch with two new gaskets and a smear of instant gasket just to make sure. 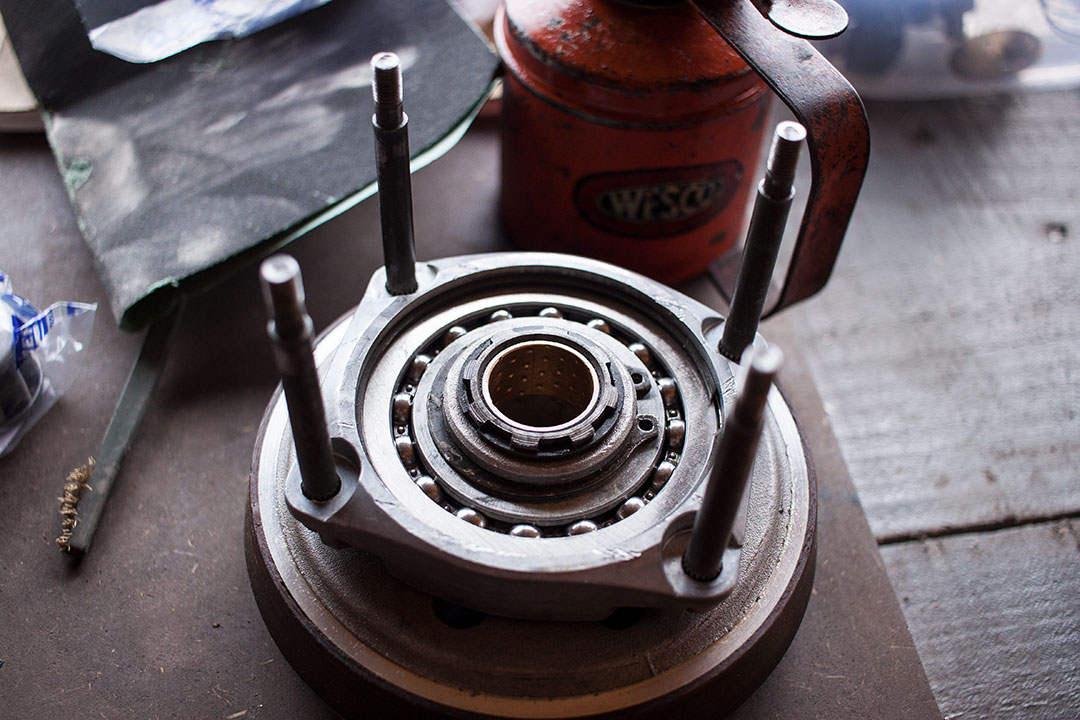 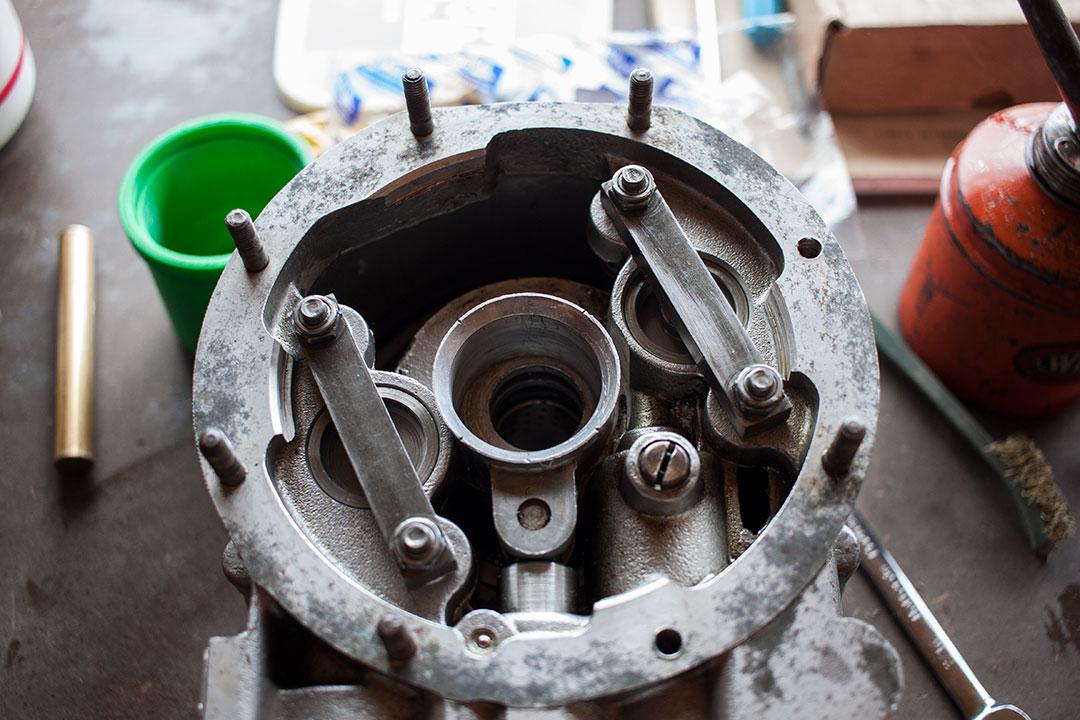 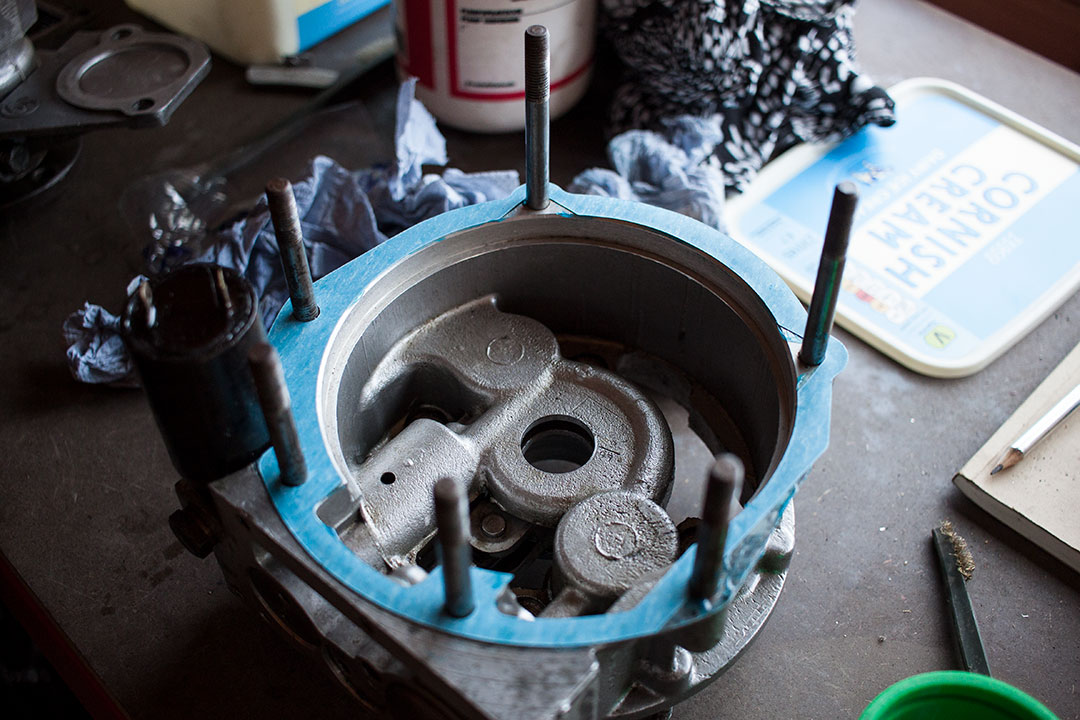 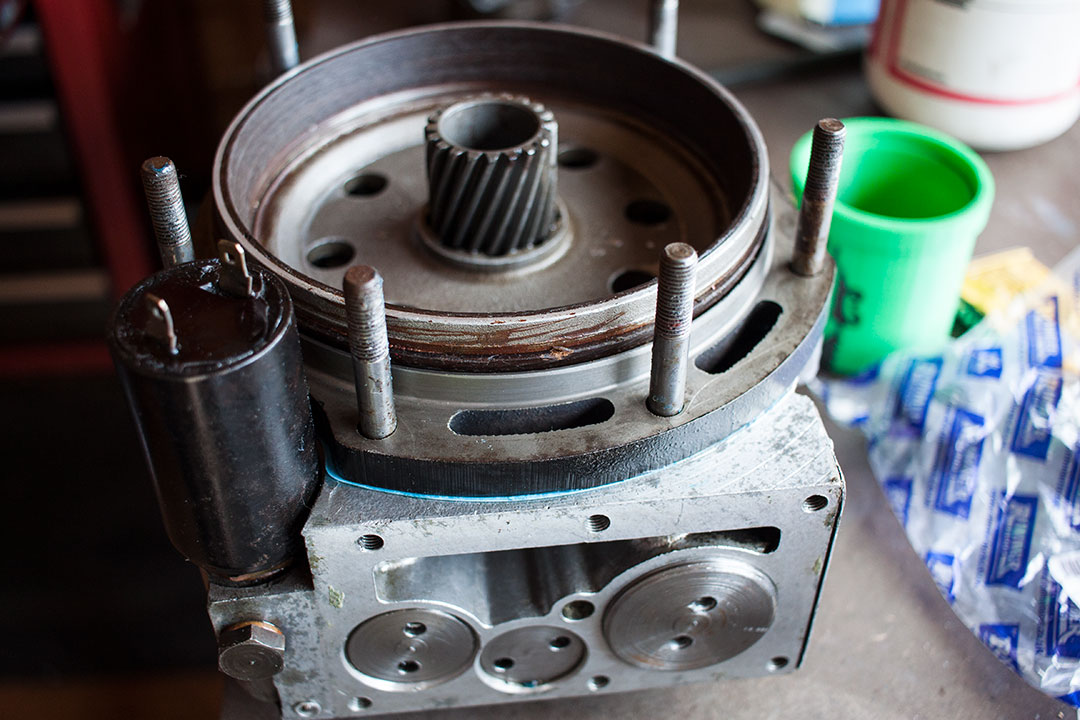 The planet gears with their carrier just slipped in to place with a few drops of oil. The two halves could now be bolted together with new nuts and washers. All that was left was to clean out the two gauze oil filters in the sump. The sump also contains a small magnetic strip to catch any odd bits floating around. 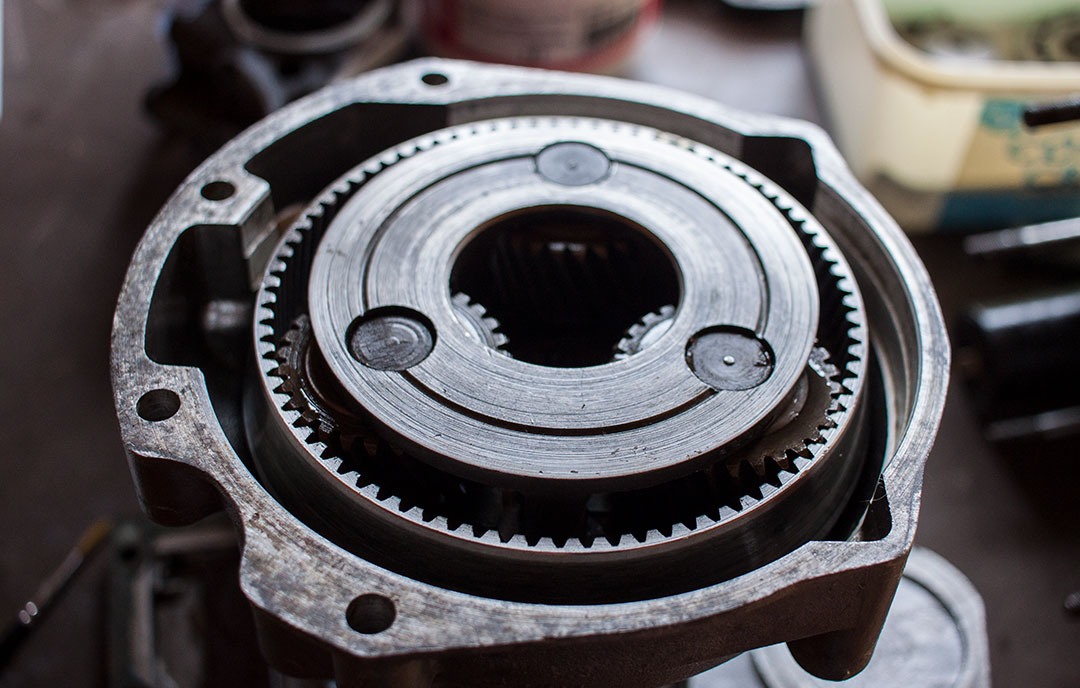 The sump is easily removed with one of the gauze filters. The other filter is under one of the screw caps which are supposed to have a special tool for removal. A couple of small bolts spaced apart the right amount on a piece of flat steel is what I used though. The two other screw caps contain the pressure relief valve and a non-return valve for the pump. As these parts are expensive I decided to leave them be. I can always replace them later on as they are easily accessible also.

I found both filters well clogged with clutch material and bronze from chewed synchro rings in the gearbox. So much so I wouldn’t be surprised if the oil flow was restricted. The circular one actually had a hole in it though so I replaced that (£17, ouch!). 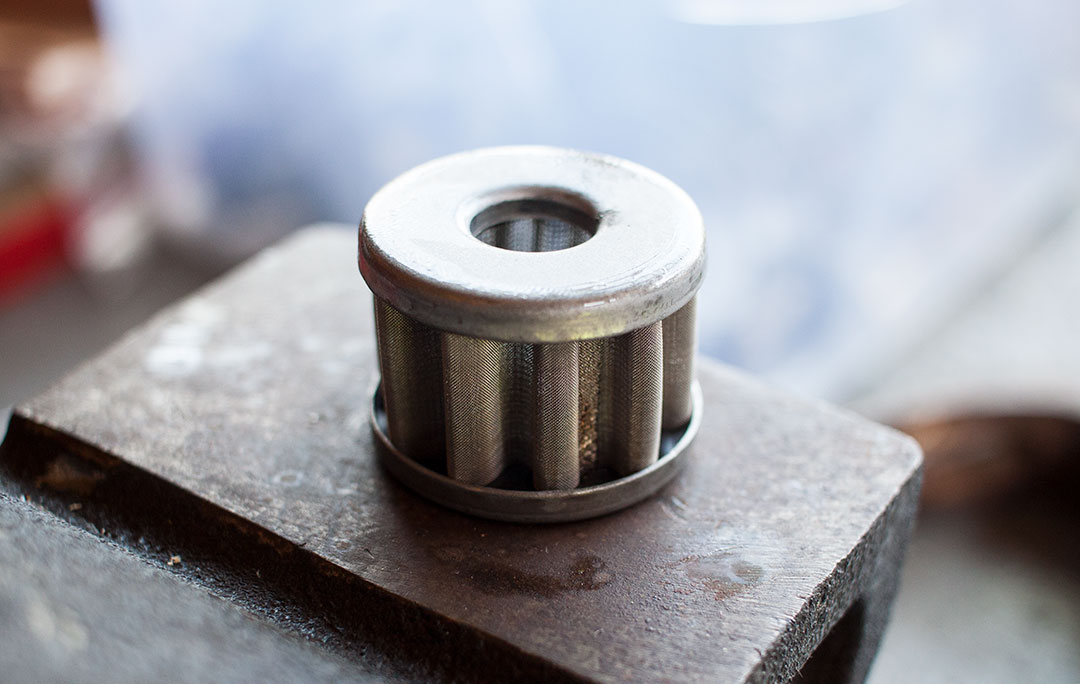 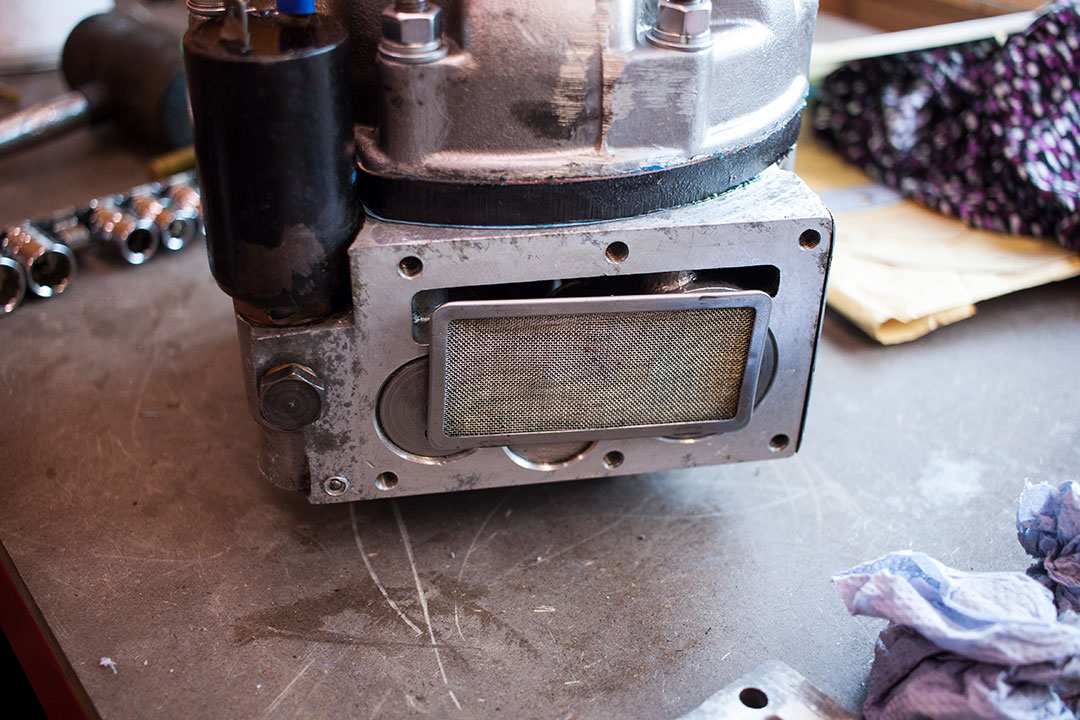 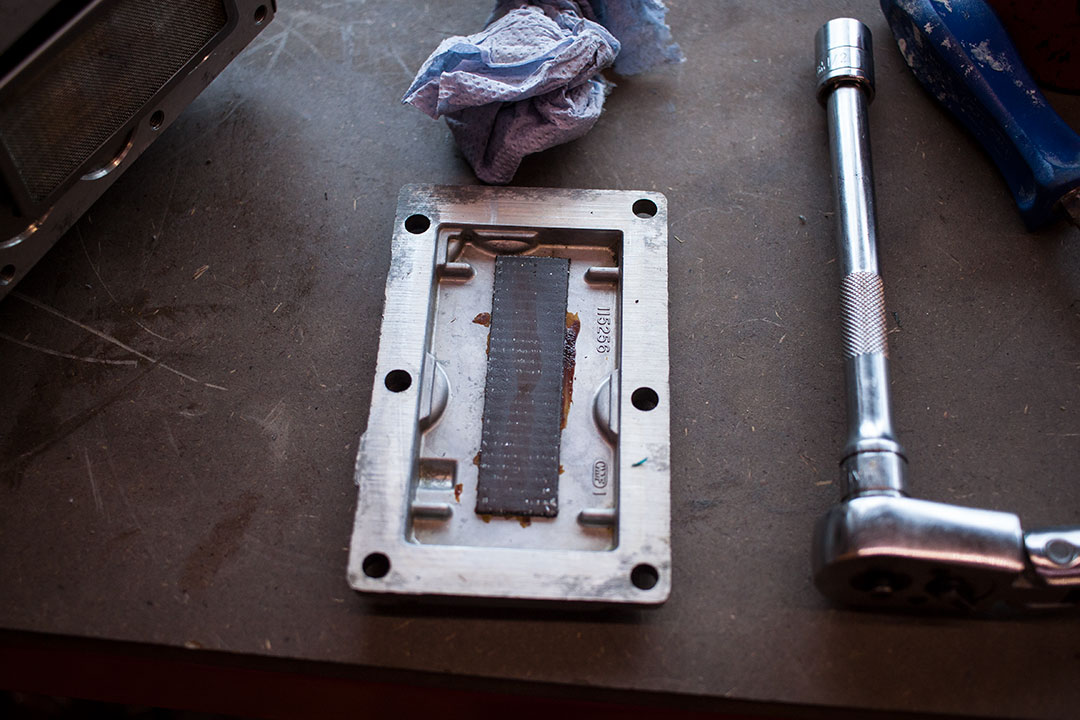 A new gasket for the sump along with some new bolts and the overdrive was pretty much there. All that was left to do was to bolt it back together with the gearbox, fit the gear stick housing and selector shaft. Now it’s ready to bolt in to the car with the bell housing once that’s done. I’ll wait until I have it back with the chassis before I bolt the very heavy, cast iron bell housing on to it and fill it with oil. I’ve been pretty meticulous with the cleaning and painting as I’ve gone along with this and I think it shows. It’s certainly in the best condition it’s ever been while I’ve owned the car. I just hope the time and effort pays off when I come to drive it and I end up with a nice slick gearbox and overdrive. 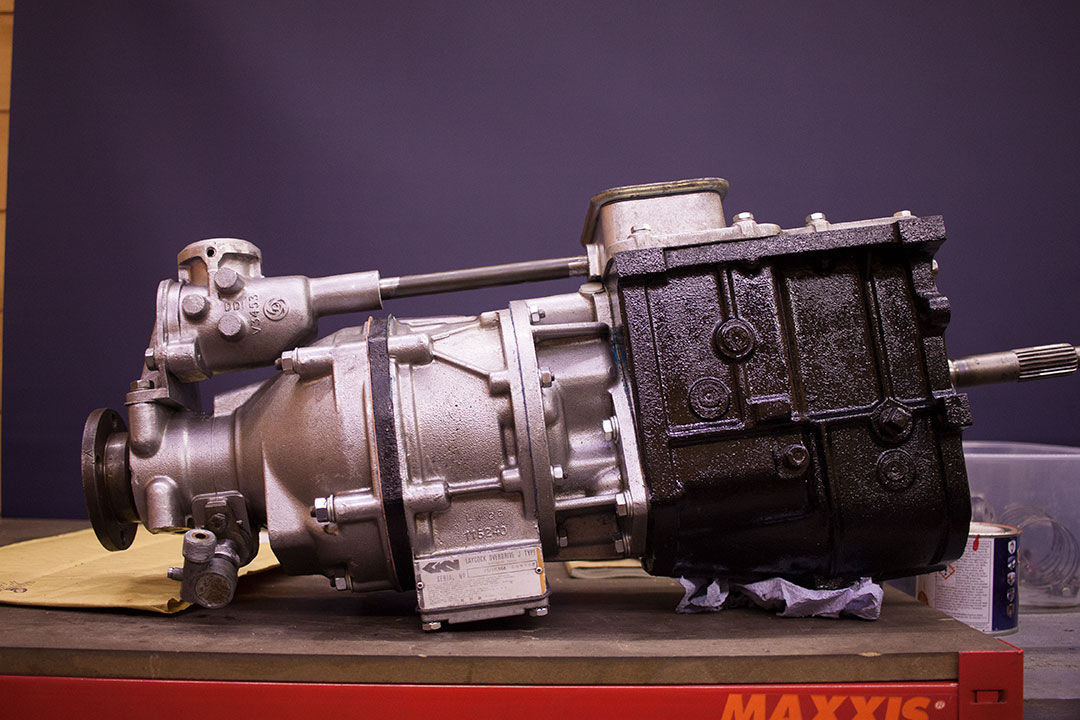 The engine and carbs are next. I’ve already got the camshaft I want to use which is basically a MKIII profile ground on to a large journal cam. It has a bit more duration than the stock 1500 one. I’ll see how it goes with that. The block is ready and cylinders glaze-busted. The conrods are balanced and polished. I just need to source a set of new pistons and get the crank ground and balanced. I have already made a start on the carbs which is basically just giving them a thorough clean and replacing gaskets. I have slightly richer needles for them to go with the cam and ported head so the old girl should be a bit more sprightly when I’ve finally got her back on the road.